Let me count the ways:

• First there’s the obvious. Like the time I was dyeing a wool/silk scarf in the microwave and completely spaced on Rule #1 of microwaving and put a couple of straight pins in my ombre-dying experiment of scarf wrapped around chopstick. And felting needles, the crafty gal’s fishhook. OW.

• Money. Every craft aisle or craft store is like a densely populated drug corner. All so shiny, so ripe with possibilities. (So full of mixed metaphors. Just go with me here.) First one’s not free, kid, but it might be cheap. Just this one time, what can it hurt? ::cue dark, evil laughter::

• Time. Which subdivides into housekeeping time and cooking time.

* Space. I have seen more than one episode of Hoarders where someone says, “Don’t throw that away! I’m going to make something with that!” Some of them are even crafters, and one had a hoard of perfectly organized, plastic-binned crafty stuff — it’s just her house had been reduced to a rabbit warren by the towering piles of bins. The tricky bit is, most crafters have projects they started and put aside for a year or two, or a medium they haven’t touched since they bought it, and then suddenly it all comes together into something amazing.

• Disappointment. There was such a beautiful vision in my head, and what I wound up with was just a sight. Sometimes it’s that my skill level isn’t up to what I want to do, sometimes I’ve half-assed a project. Both these can be fixed over time.

• Pinboard. See Time, above. Man, is that a time-suck, but it’s so inspiring too. I have a feeling a good many things I make over the next year will be projects I found there.

• Some projects tell the world that I’m a big ol’ geek. You know, the Tardis makeup case or Supernatural toilet paper cozy. There is no help for that, because I am going to make them.

• My own personal danger zone is my love for crafts with unknown outcomes. I got interested in fiber arts via a class on dyeing silk scarves with flowers and/or vegetables. Even when I tried to reproduce a color or effect exactly, I might get something entirely different. It was cool because I’m not talented at drawing or painting and I could make really beautiful things, but sometimes the results were much less exciting than I’d hoped and expected (wildflower scarves, I’m looking at you).

• Another dangerous factor for this year will be the Random Tutorial Generator. I’m going to pick a point sometime this year when I use it to determine a project, though I’ll probably mitigate the terror by giving myself a few rolls of the dice if something totally unsuitable comes up, or if I have to buy a mangle to achieve it. (Maybe I would buy a mangle. Because I just love saying mangle. (In Barney Fife humble-brag casual tone: (sniff) “Yeah, I just bought a mangle.”)

Anyone still with me? What are your personal danger zones?

I blame Misha Collins.* Partly because he’s so darn easy and fun to blame for all manner of chaos. Partly because it really is his fault. The crafting frenzy I’ve recently been indulging in got kicked into high gear with GISHWHES, aka the Greatest International Scavenger Hunt the World Has Ever Seen, brainchild of Misha Collins. Instead of merely finding things the game commanded us to make things or to cause various bizarre events and document them. Did you happen to see the news story about the floating Christmas tree that was carried toward a British Columbia airport, prompting the woman who unleashed it to call the RCMP to alert them? You could blame Misha for that, and you’d be correct. That was a GISHWHES team in action. Incidentally, GISHWHES was not just a scavenger hunt but an attempt at breaking the Guinness World Record for largest international scavenger hunt. We’re all still waiting for word from Guinness on whether that happened, but with over 600 teams, I think we probably did it.

So. Yes. Craft frenzy. In the course of the 10-day hunt, I made several things: a laptop made entirely of felt, a chandelier of kale, a 2-ft. sculpture of a seagull made entirely of tampons and sanitary napkins. I’ll pause while you let that sink in. 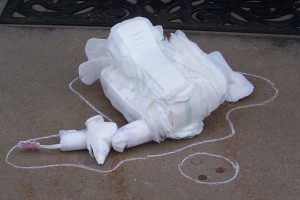 And the frenzy has continued beyond the hunt. I’m still playing with felt, as well as silk and wood and Mod Podge and dye. I am backing away slowly from the sanitary napkins and kale.

I also blame Jonathan Coulton.** Some years ago he did a weekly podcast called A Thing A Week, which lasted over the course of a year. Each podcast was a song that he’d recorded — most of which he wrote. So his creative frenzy inspired mine.

So basically that’s the deal here. I’m planning to make things for the next year, one per week. What does not kill me makes me stronger — and may make me a buck or two on Etsy.

This isn’t a tutorials blog — I’ll provide links to project sources, unless I made the thing up, in which case I will provide information on how to do it. (Or at least how I did it.) This is mostly about the process and the pictures. And the disasters, on occasion. Think of this as more Julie/Julia than Martha Stewart. (Oh yeah, I blame Julie Powell, too.)

* Who is Misha Collins? He’s an actor, recently a regular on Supernatural, as well as a bad guy that Kiefer Sutherland punched in the throat on 24 and a talk show host who’s a mixture of Art Bell and Carl Sagan on Stonehenge Apocalypse. (And may MY dying words echo his: “IT WAS A ROBOT HEAD!!”) He holds a really rather unseemly sway over his fans.

** Who is Jonathan Coulton? The troubadour of science nerds and science fiction geeks and pretty damn funny. Known for many many things, but I’ll take the anthem of corporate drone zombies “Re: Your Brains” and the folkie cover of “Baby Got Back.”