I got up first thing and took 2 pictures of my project and as I was cropping them on the computer I noticed something that’s barely noticeable on the actual thing, so I had to fix it. Did that, photographed it, and now I’m ready.

So, the project itself. This is one that started out in one of our women’s art gatherings. I’d brought another project to work on, but I saw what everyone else was doing, and I was all, “Ooooh, shiny!”

Literally, because we were using shiny silver metal tape [tm] to make fake pewter medallions. This was a project I’d seen done before (when I was also hell-bent on some other project) and thought was cool, so I jumped on the second chance. There’s a lot you can do with this method — adding them to altered Altoid tins (and I really would love to have a supply of these tins, but I am not a person who regularly sucks on mints), or make art cards of them, or do what I did here, adding it as a decorative element to a box.

The shiny silver metal tape [tm] can be found at hardware stores or places like WalMart. I hear there’s now a lookalike of plastic so you have to be careful you really have the metal type. It’s on a roll about the size of duct tape.

The big thing you can do with this tape (other than whatever its actual purpose might be) is play with texture. I’ve seen some very pretty cards made where it’s been taped onto card stock and then rolled through an embossing machine. But for this project we used pre-cut chipwood shapes and used little shaped paper punches on card stock. One of our group uses old plastic cards as her design base — used gift cards, stowaway hotel key cards and the like. Some of the group combined different shapes and came up with some really cool abstract designs. I found a paper punch with a tree design (probably for Christmas card projects) and decided to make a wee forest, and I chose a round chipwood precut as my base, since I decided to put it on a round paper mache box.

The box, by the way, was one of those items that sometimes appears in the stash of art materials in the famous back room at these art gatherings. Sometimes people start working on something and then lose interest, or they’re only there for one time (we get the occasional tourist passing through who comes to art night, which is pretty cool). So this box was one of those pieces, with a patchy coating of white paint. I kind of liked the effect, which made me think of birch bark, so I left it as it was. It could probably look more like birch bark, but I decided I’d rather have it be suggestive of such than be taken too far so it looks nothing like it.

On to the fake pewter! One of the regulars taught us this project, which she’d gotten from a show on HGTV before they switched their programming all around to appeal to a different demographic. Take your backing chipwood piece and glue on shapes of card stock or more chipwood, then carefully tape over the whole thing with your shiny silver metal tape [tm]. Your edges will overlap a little bit, but you want to rub them down so they’re hardly visible. We used orangewood sticks like you’d get in a manicure set. The same stick gets rubbed over the shapes around the edges so there’s some definition there. It takes a while to get the tape pushed down over a complex grouping of layers, but you want to be careful not to punch holes in the tape.

Once that’s done to your satisfaction, the next step is to etch some designs into the surface of your medallion. I went with some simpler Zen Tangle filler patterns, varying the patterns in different areas, as I would in a paper-and-ink Tangle. This part of the project I did a while back, so I can’t remember what I used to make the etched parts — something more pointed than the orange stick, but not so sharp it would tear the tape.

That’s as far as I got the night of the art gathering, and the box and the medallion have been sitting among my stash for a while. So finally I pulled it out and finished it, which was pretty simple. The last bit for the fake pewter is to brush on black paint so that it goes into the etched lines, then rub it off with a tissue so that the paint stays in the lines but mostly comes off the rest. It might take a few times to get it right so all the paint doesn’t come off, and if you rub too hard over the seam where the tape overlaps, it can curl up or wrinkle.

So after the paint dried I glued the medallion piece onto the round box, and then it was done.

Done. At least I thought so.

So there was a spot that looking at it in person I thought might pass for a part of the fake wood, but that is one photo that screams “tiny coffee stain!” So this morning I grabbed some craft whitewash and a tissue and dabbed some one, and I think I’ve nailed it.

When I travel, I still like having my flight stuff on pieces of paper, even though it’s electronic all the way. And you may have noticed a good many airlines save money by not even giving you a little envelope with your gate number marked on it and your boarding pass tucked inside. I like having an envelope with all my documents in it that’s not just a plain white envelope, so when I reach into the chaos that is generally my purse, it’s readily findable. I used to have a pack of long envelopes with a rose design all over them (and a lighter color box in the area where you write the address), but they’ve been depleted after a few years of travel.*

So I just got back from a visit to my longtime friend who lives in the DC area, and my project of the week (last week, ahem) was a pair of envelopes that are made from cute template giveaways on the Hermes website. Found the link on Pinterest, which will come as no surprise to anyone.

The templates are paper clutches called Jigé, an envelope style with side panels that let it open outward a bit, and a tab that goes into an H shaped 3-D clasp. There are several premade designs you can download, as well as a blank one you can design yourself. I decided to make a couple of these as my travel envelopes.

Is it cheating if my craft is cutting out a template, gluing it together and mod podging the whole thing? So be it. Travel weeks are hard. Maybe at some point I’ll do the blank one and tart that up some with Zentangles or collage or something.

So the template prints out on 2 pages, like so:

Side pieces and clasp pieces

I did some serious rassling with the clasp bits. On one version of the clutch I missed the little blue lines that indicated I should cut little slits on the body of the bag where the H-shaped piece goes. And as it turned out, the one I messed up was far easier to deal with. There was plenty of space for the long tab to slip through (too much, really, to keep the clutch secured), but when I did do the little slits on the clutch and slipped the back tabs of the H piece into it, I couldn’t get the tab in at all. So gluing the piece without slipping any tabs through the little slits seems to work best.

(All the guesswork in this post is due to the fact that there aren’t instructions for how things should be assembled, just a little legend that shows you which lines to fold and which to cut, and where to glue.)

The clasp bit gets the most folding, and winds up a 3-D piece when you get it done. 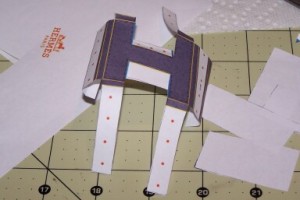 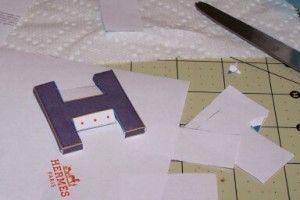 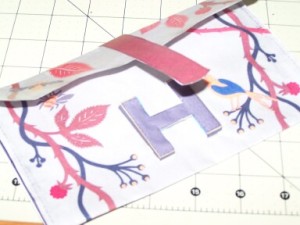 Then I slathered the whole thing with Mod Podge, so it would hold together a little better in transit and usage.

And here are the two clutches I made. The one on the left is the one where I think I did things according to … well, no directions, but where I made the cuts. The right is the one where I didn’t see the cut lines and just glued the clasp on. You can see which clasp actually worked, can’t you?

They got a little battered because the shoulder bag I was using was too small, but they held up decently for paper. One of them had the tab come off, and truthfully, I think I’d rather make a version without the tab and clasp at all. A little dot of sticky Velcro or something would hold it together just fine without the tearing paper, I think. But someone out there might have better luck interpreting how the thing is supposed to be assembled and have a better result.

From what I can tell, there’s not a direct link to the templates, but here’s a way to get there:
http://lesailes.hermes.com/us/en/
After some animated stuff, there will be a grid of pictures without explanation. In the center is an orange circle. Two squares to the right should be an image of a hand and a white bag with the words “I want it, I’ll have it!” Click on that, and you’ll find the templates for the different clutches. You might want to grab them sooner rather than later; Hermes apparently had a previous paper template bag that is no longer available.

And here’s a better look:

I am a sucker for Day of the Dead images, so that’s the other one I made. Cute printed on stitches around the edges make them both look like more work than they were.

*The envelopes get quite battered after a trip to and from, but I’ve saved some of the used envelopes to incorporate rose designs into collaged boxes that I’ve made as gifts. The creases and worn edges add a nice element of age to the project.