So March 4th is the day Misha Collins decreed for “a melee of kindness” worldwide (“march forth” — I see what you did there, Misha.) And since we all do his biddings like dittoheads defend Rush, I plotted my outing. I decided why the hell not blend it with the crafts project, but I wasn’t sure what form that would take. And then I saw a link somewhere (wish I could remember where) to Operation Beautiful, which involves posting little messages, usually on bathroom mirrors in public places, but elsewhere as well, to give a lift to those who see them.

So it all came together in an idea to make feltbombs of kindness. I love the whole yarnbombing phenomenon, where knitters fix “graffiti” made of yarn in public areas. I don’t knit (yet) but I have plenty of sweaters, a number of which resist felting, so what do you do with those? I wanted something that would be a pop of color on a gray winter day in the downtown area, so I dug up a pink sweater that had refused to felt, so I cut off the sleeves and needle felted messages on them. 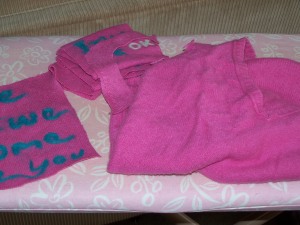 Most of the messages were felted onto the uncut tube of a sleeve section, with the cuts at the right and left sides, so I could drape them over a small tree branch. One I felted so that the cuts were at the top and bottom to put over a fencepost at the arts center that has meant so much to me. One last one I cut open and made a sort of baby-bib hanger so I could get the whole message on one side. 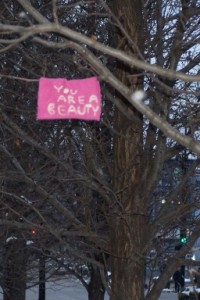 I was already going to Madison today to go to a reading by my friend Renee D’Aoust from Idaho, and so I met up for lunch with another friend from Idaho who now lives in Madison. As I told her about AMOK and Dangerous Crafts for Girls, I showed her m little felties, and suddenly I had a confederate! Woo hoo!

We hung one outside of A Room of One’s Own, the bookstore where the reading was, and it was a perfect spot — there are no trees out in front of it, but ugly new parking meters provided a perfect “neck” for the baby bib. And the message was a nice fit, too.

A random act of awesome.

And here are ones we hung on trees:

This one I hung across the street from a fire station.

On State Street, in view of the Capitol.

Renee’s reading from her book of essays, Body of a Dancer, was terrific — she performs as much as reads, and there were a lot of knowing laughs from people who came who were or are in the dance world, especially in response to her voices of people she studied with. And there was a raffle! And I won it! I got a $20 gift certificate to the bookstore, so while Renee met up with people she’d arranged to spend a few hours with, J and I wandered the bookstore and I found three books, which meant I spent a chunk of money beyond the certificate — which I consider a random act of kindness for an indie bookseller on top of the RAOK of the gift cert.

My last feltbombing was for the arts center. It was the last bit of twilight as I drove up the street and skulked onto the grounds to deliver my little prezzie. 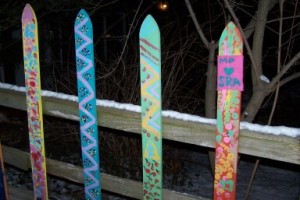 I added a feltie to the already arty painted fence.

All in all an excellent day of kindness and reconnecting with friends and craftiness.

So do you think I should send the remainder of this sweater to Rick Santorum?

No way sweater vests are coming back.