I spent a lot of my weekend moving furniture and cleaning the carpet in my living room, or recovering from doing so. And despairing over how the process of cleaning something could create such utter chaos in my house and hoping I could get things somewhat sorted by the time I have company next weekend. But I finally did settle in while waiting for the carpet to dry, and finished a project I’ve been working on for a while.

I’m close to finished, but I need another four buttons to finish my cuff bracelet, and some kind of closure that uses them, so I’ll have to hit a fabric store or the dreaded Walmart. (All right, I admit it — I bought the original eight buttons at Walmart. So yes. That is where I will have to go.)

Once more, my fondness for using bits and bobs and irregular leftovers bites me in the butt, but I don’t think I care. I had half a cowlneck sweater in alpaca wool left over from another project (the Occupy tent? Can’t quite remember), so I figured it would make a cool cuff, though it’s not exactly a fit.

When I was in Austin, I bought some silk hankies at a fiber store. They aren’t actual hankies but the silk pod from a cocoon that’s been stretched out over a square frame. The pack I bought was dyed a delicious mixture of purple and blue called Spilled Ink. I thought that would make a great thing to use as an overlay on the alpaca, so I attempted a wet felting, adding some wool into the mix to get fibers of both the silk and wool sticking to the alpaca. Not a great success (or even a medium success), as they just peeled off the alpaca. But I liked where it was going so I pulled out the felting tool and needled away. 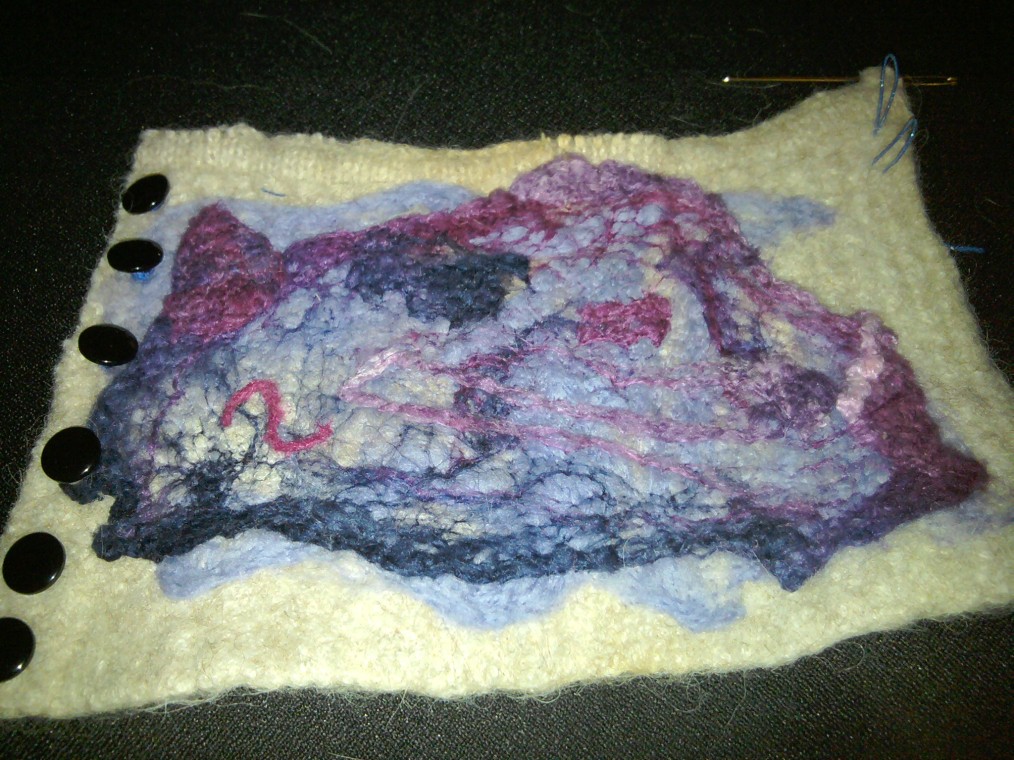 The matter of closing the thing is probably the trickiest of this whole project (yes, it’s free-handed). I liked the thought of a row of tiny buttons, very Victorian in that fiddly sort of way. My first thought was that I’d make a loop of elastic on the opposite side and slip them over the buttons, but I don’t think I like the way it looks. 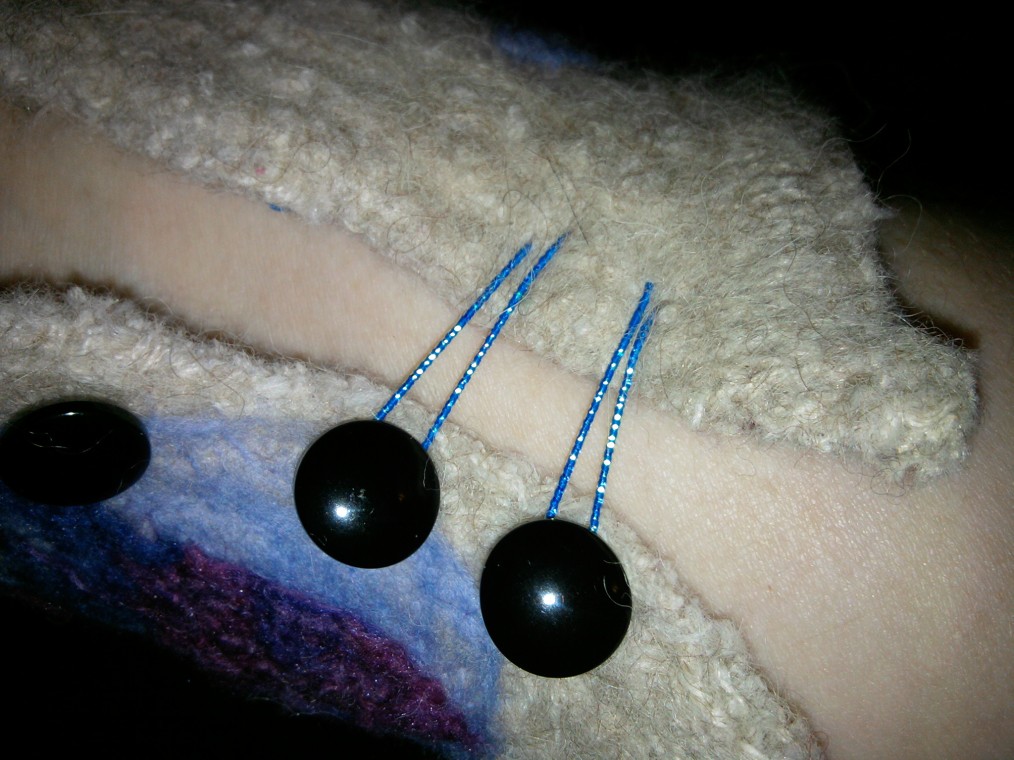 Made the decision to put another row of buttons on the opposite side instead, and I guess I’ll try some kind of lacing system to get the thing to close. I’ll have to report on that when it’s finished, but I think I have a way to get it to work. Maybe a couple of options.

After adding the last bits of roving into the design, I am pretty happy with what I have. I did sew on a couple of wee little beads, remarkable more for the source than anything else. A year or two ago I bought an armload’s worth of wee beaded bracelets on eBay that Eliza Dushku had donated to one of her favorite causes. (I don’t even want to say what I ended up spending because I could not allow defeat.) Some of the stretchy little bracelets are so stretched out they’re just loose strings, more or less, so I had planned to use them in various projects, but this is the first. I put in three, just for a mysterious bit of sparkle, and I might add more later. 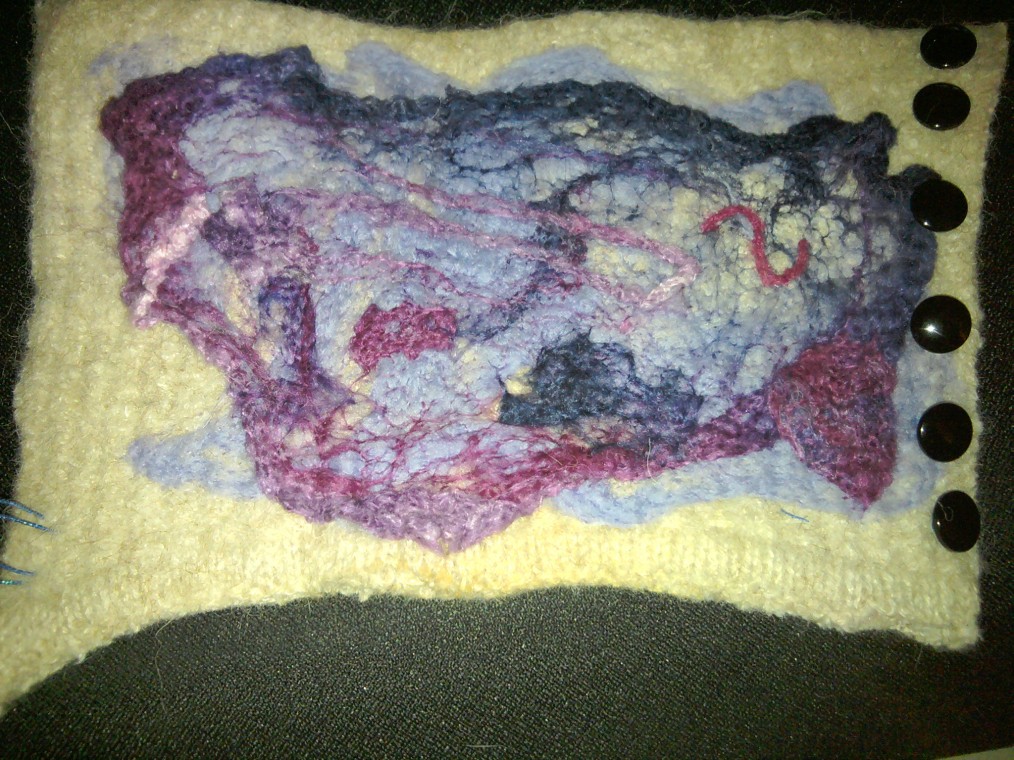 Alas, I got nothing done for the art show at Wiscon, which had been one of my major goals this weekend. I have the stash of silk scarves, of course, but I wanted to have a few different types of art up there too. Well, after I have finished moving all the furniture back into place and completely spiffed up the guest room. Ahem.

By the way, the color of the alpaca is truer in the second picture, not the yellowed first or third. My camera’s batteries died and so I had to use my phone.

And hey, as of today I’m one-quarter of my way to my goal. WOOOOO!